After seeing Jularr's fantastic use of this tunic/vest piece, I decided to use it to the same effect as Eadyth has always been a friend of the Elves. 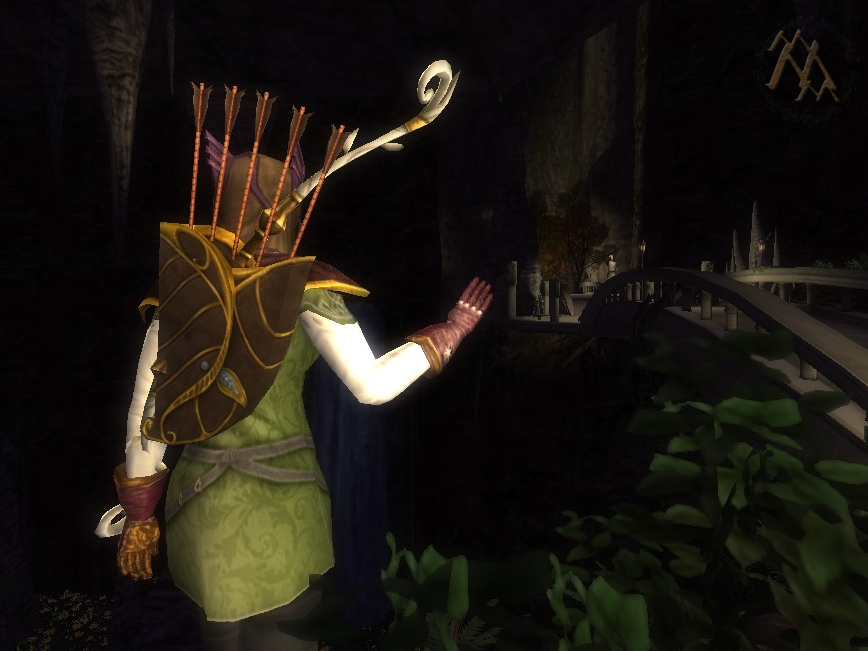 Then as I was wearing this outfit and doing the Lothlorien allegiance quests, I remember visiting Arwen in Rivendell and how beautifully this outfit blended into the surroundings, despite the pretty jarring mask. It was that moment I decided I knew exactly where I wanted to take screenshots for this outfit, and that's what you're seeing right now. 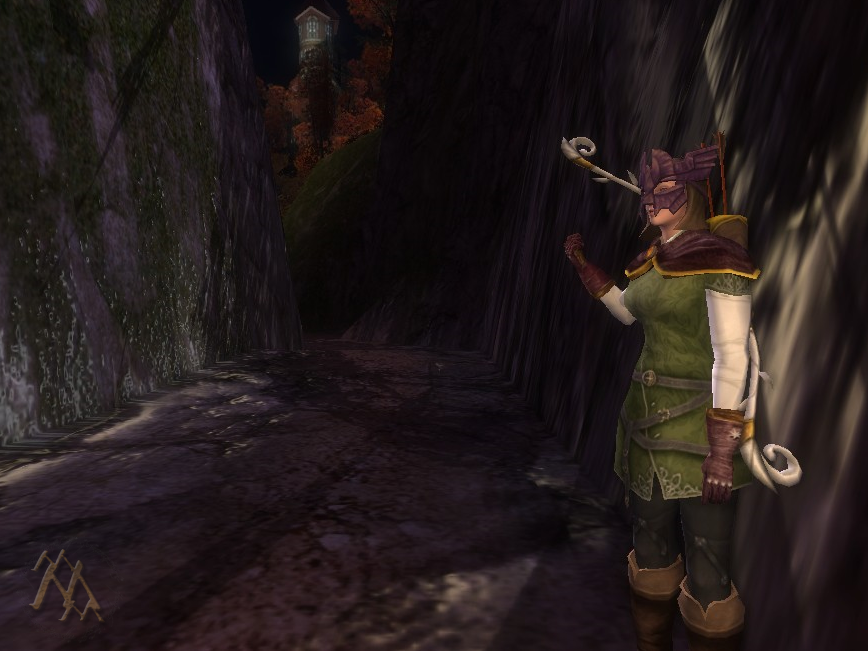 What fascinates me about my decision to use this chestpiece is the strong white of the sleeves, a colour I've not tried (save on Calonice, but to no avail) to use, or even consider using. It's a shade that I find very difficult to match, and so few pieces have the same-ish white. Perhaps it is that success that I saw in Jularr that really caught my attention, so thank you to the player for inspiring me! After all, this is what this blog is all about! 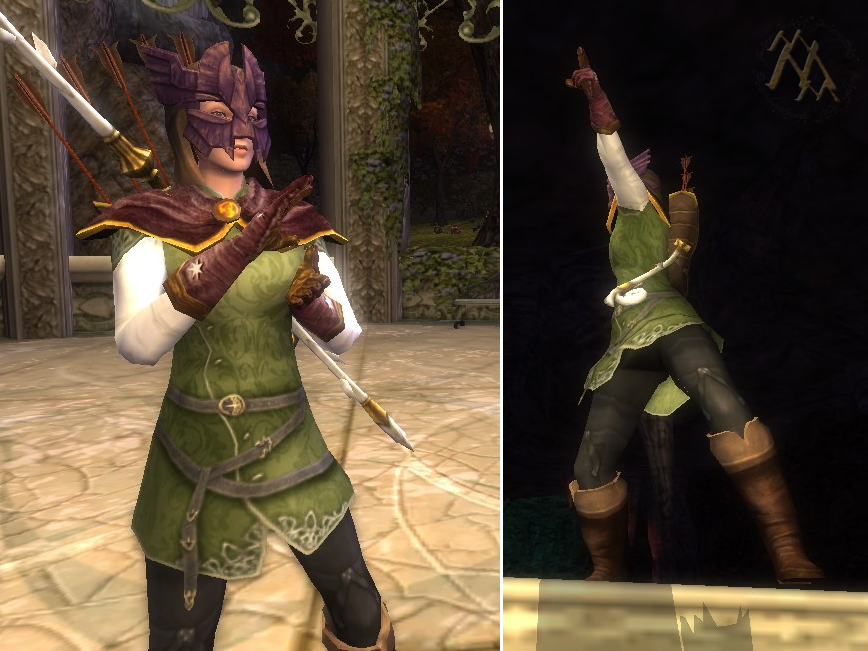 Similarly to Celebindil's Fell Friends outfit, I have nothing much more to say on this, as I literally took 10 minutes of what was basically me just throwing pieces I had together. 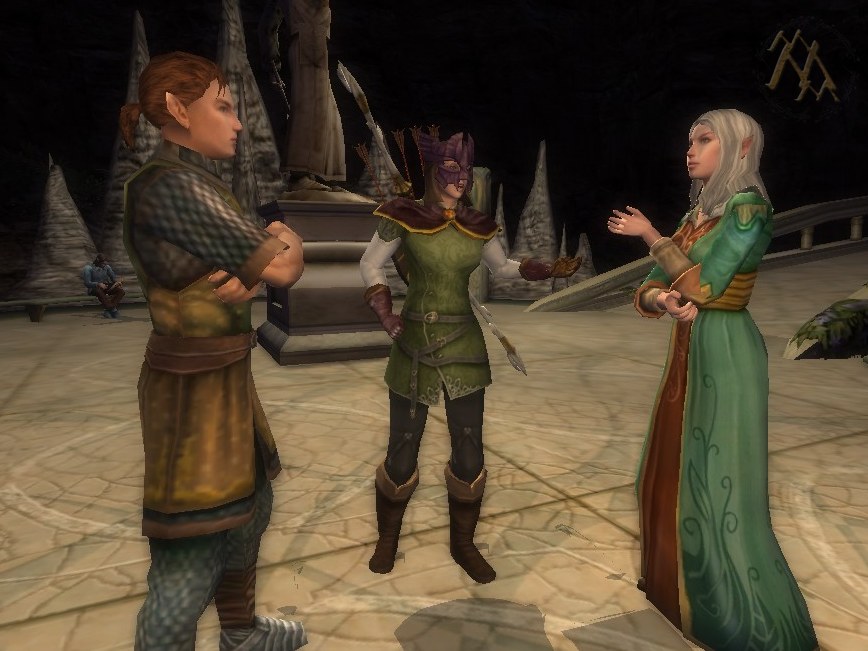 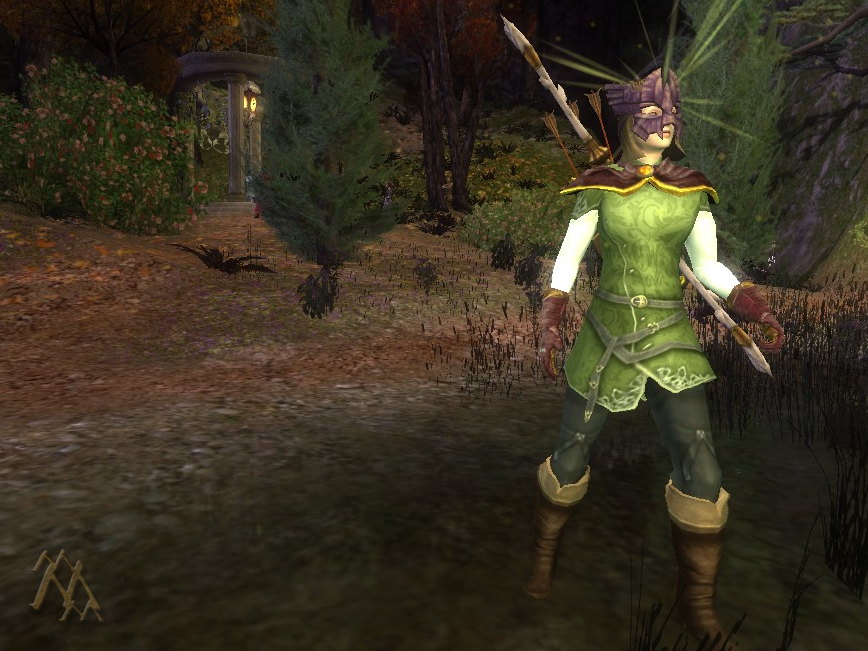 The Raging Rose (with Jularr of Gladden)

Remember what I said in the last Jularr post about controversial clothing? Yeah, this was one of the outfits I was referring to. 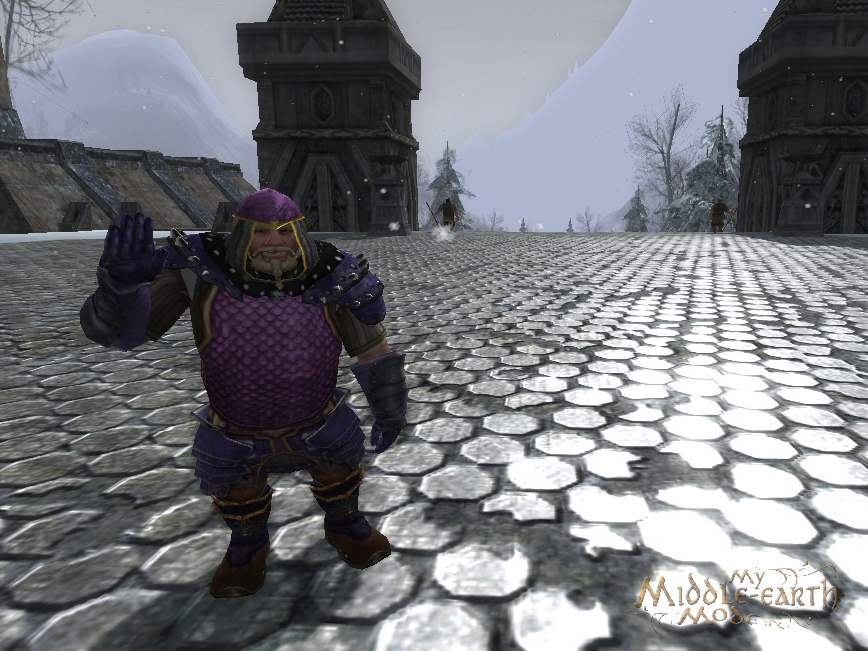 I mean, who would have thought to have rose and indigo be the main colour scheme of an outfit that included the shoulderpiece so reminiscent of Mordor? Definitely not me. But it works! Somehow... It's strange, and quaint for sure, and just simply brilliant! 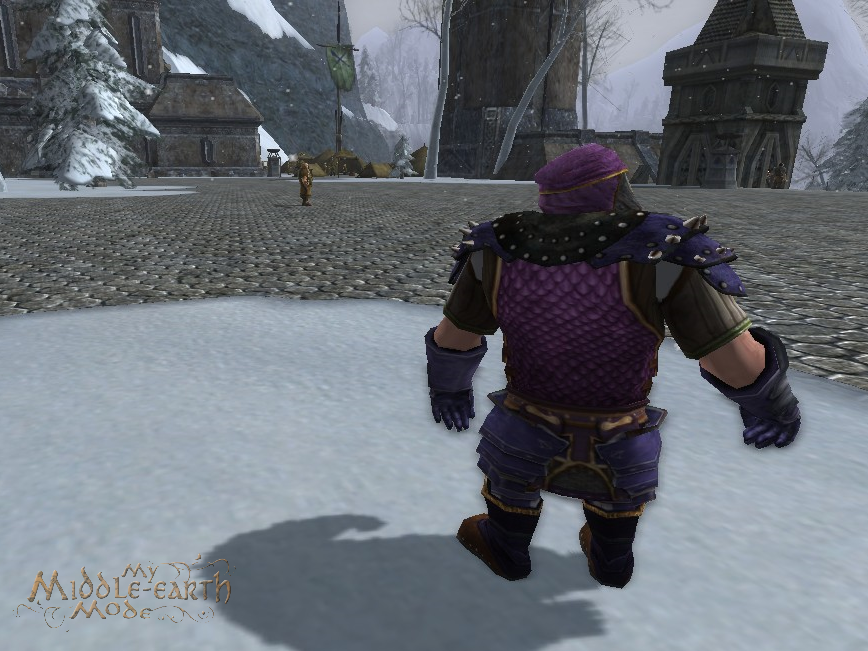 I might be really biased, though, as pink is my favourite colour(?), but this outfit really has an outlandish feel to it, almost like it didn't belong in this world, which can be cool if you don't overdo it. It kind of reminds me of Eadyth's Flame of Fornost outfit, which was designed to be look similar to other MMORPG outfits with vivid, fantastical colours, etc. 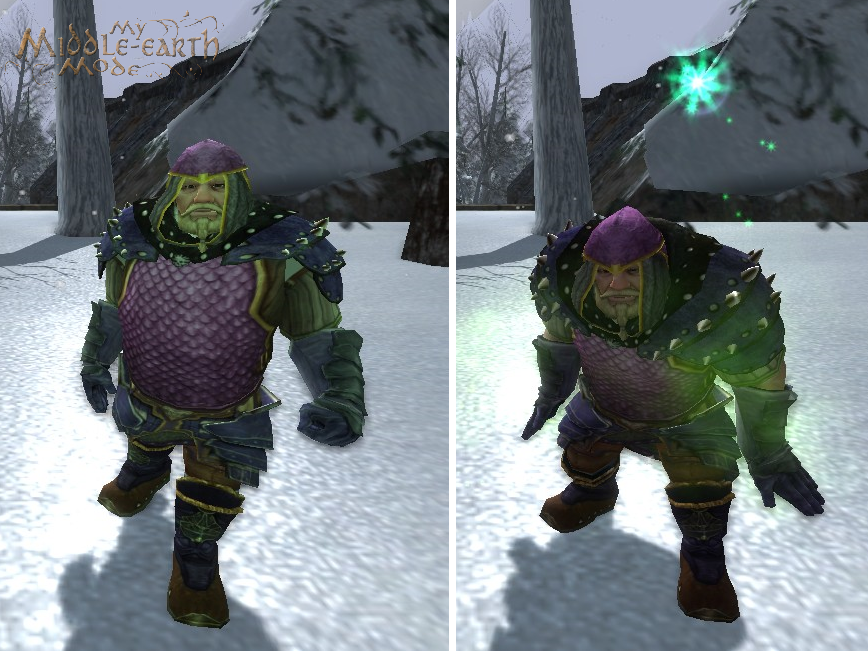 Another amazing aspect of this outfit is the fine gold lining found on the head, chest and foot pieces. It's a subtle detail, and are all undyeable parts, which make the inclusion even more interesting as Jularr would have had to find pieces that had those ready, not being able to alter the colour to fit his design. Although the shoulderpiece stands out as it doesn't really match anything else on the outfit, I think it can be forgiven on the basis that this outfit really challenges the norm of outfits, and succeeds brilliantly. Well done, Jularr! 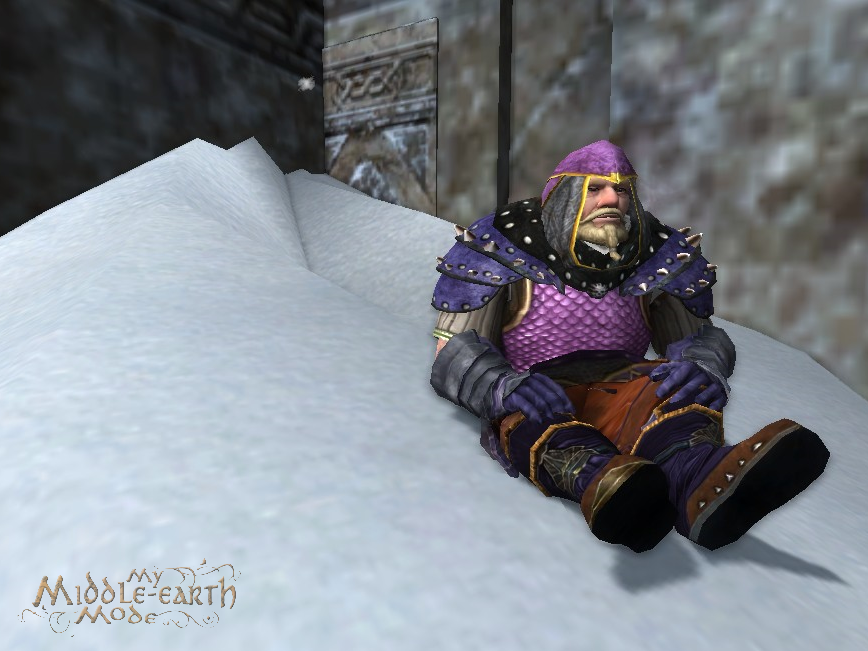 Excited to have finally gotten the Nurnhoth Garb, I threw it onto the toon I needed it most for immediately and everything just went from there. 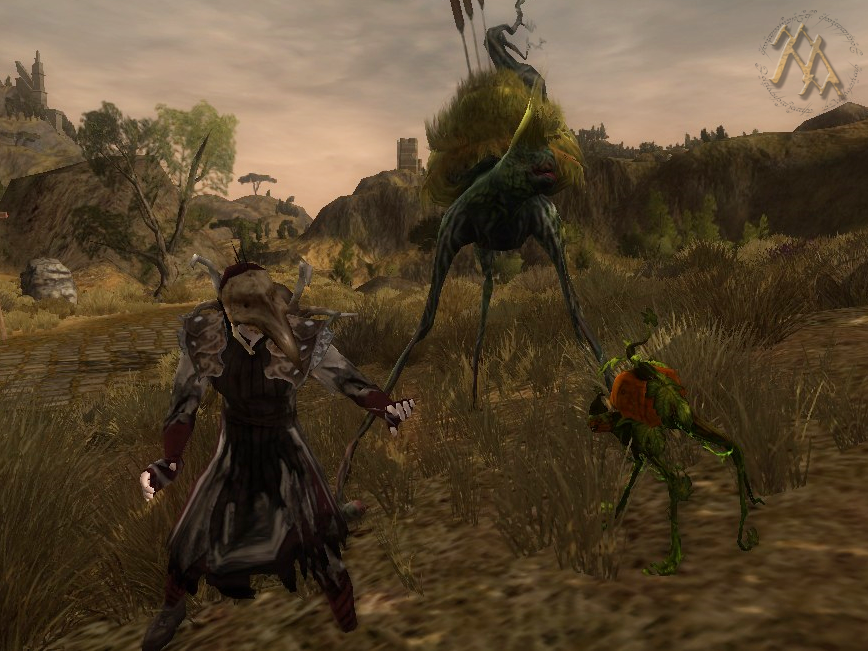 In this outfit, I played a lot with the many different shades of brown, then used some burgundy to give it a look of a long-dried stained blood all over, giving this outfit a cruel and vicious look. However, I have no idea what gave me the idea to include both my bog-lurker and gourd-lurker as part of the outfit, but I spent so much time on the Harvest Festival just to get that cosmetic pet - I think they look good with him, though. 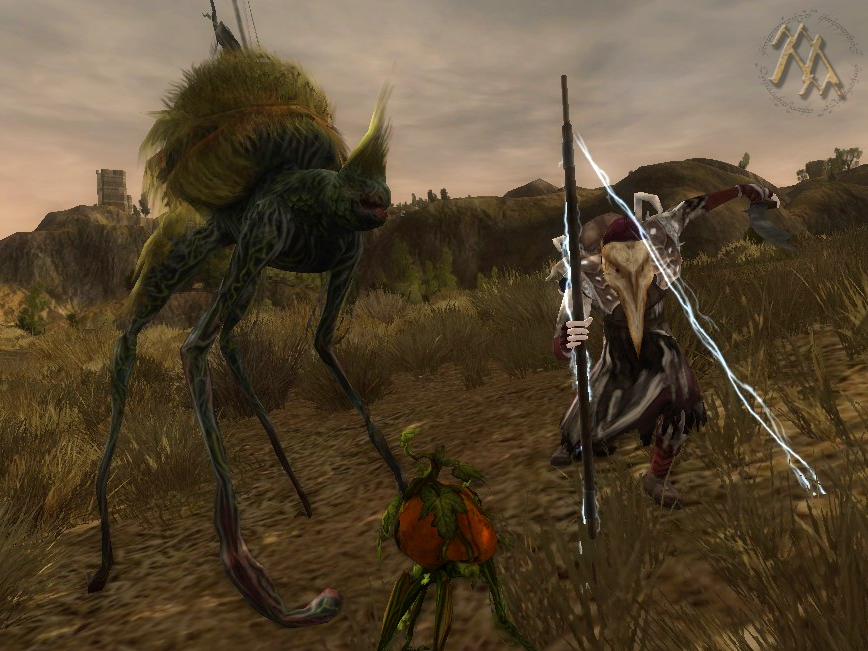 It is at this point I've come to realise I don't have much else to say about this outfit, since I basically threw everything together in an instance, taking me literally 10 minutes to make. Thus, I'll leave you with the rest of the screenshots and component list at the end as per usual. 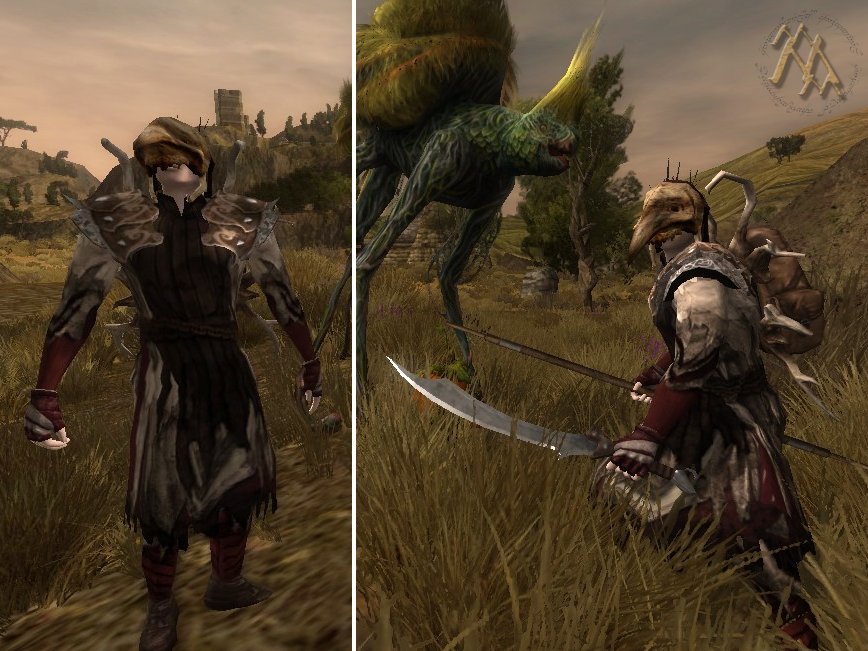 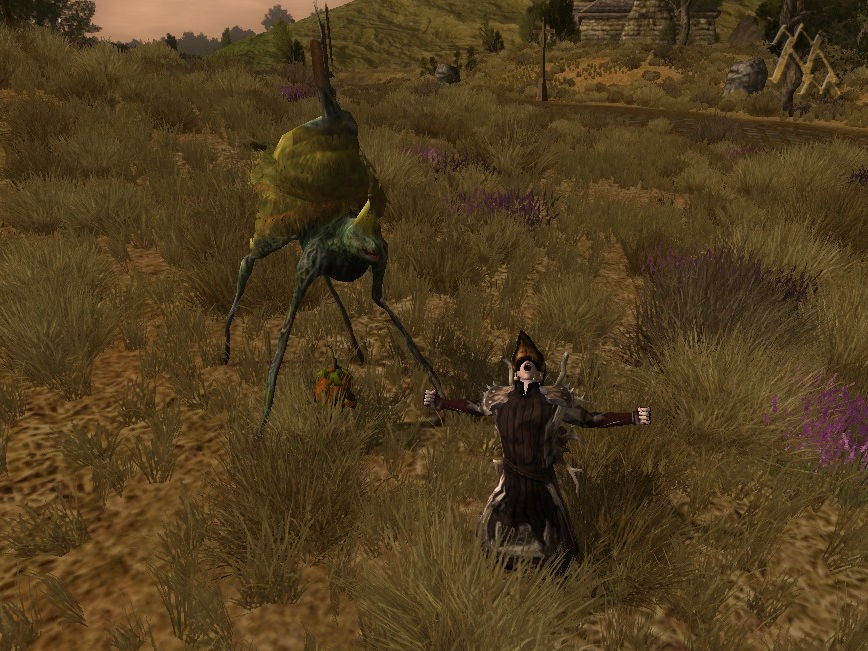 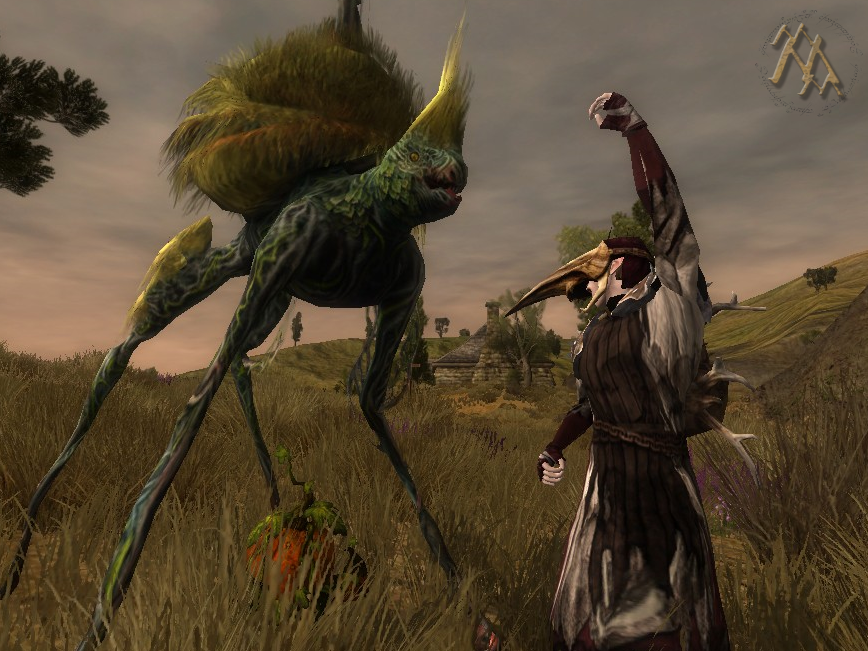 Ma Mian (with Li of Gladden)

Ma Mian, translating to "Horse Face," in Chinese mythology is one of the two guardians - together with Ox Head - of the Underworld. In many stories, it is they who escort the recently deceased to the Underworld for judgement, punishment, cleansing, and finally reincarnation. 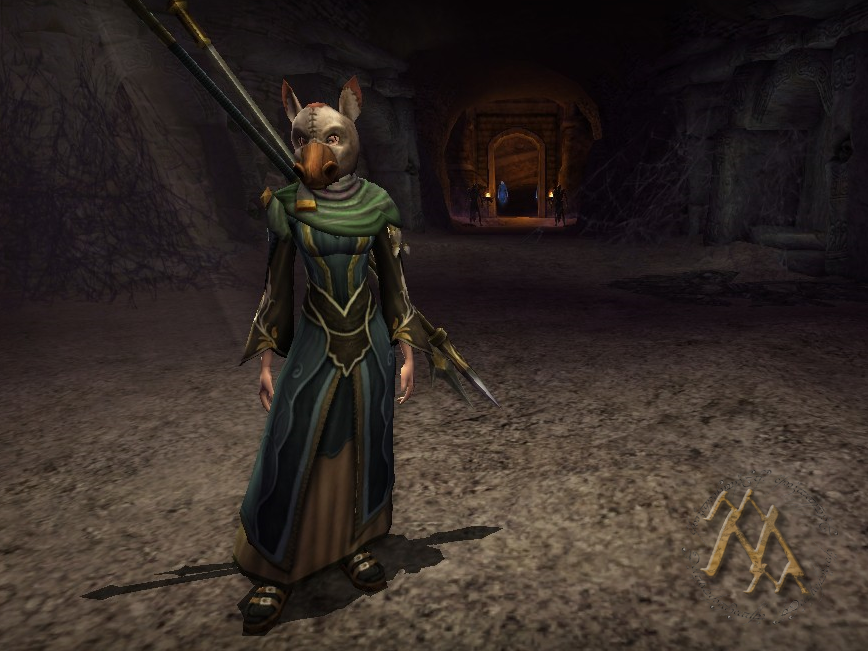 Okay I have to say that Li may be my current favourite guest contributor as 1) she keeps using Chinese themes in her outfits (friends of mine can vouch for my intense fascination and obsession with the culture), and 2) the sheer absurdity that she makes look acceptable I find simply astonishing! I mean, she walks around with a donkey mask pretending to be a guardian of the Underworld who canonically has a horse for a face. And just look at that super weird colour scheme for an entity that escorts you to the Underworld! 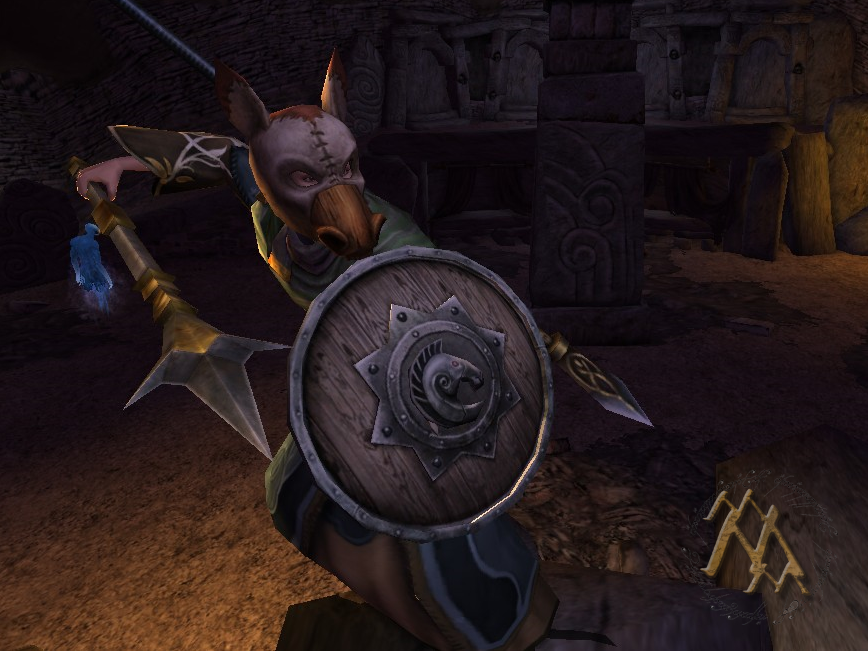 Another brilliant thing Li did was to use a horse-themed shield to reinforce the point that her outfit is meant to have a horse face and not a donkey's. It's the little things that really matter! Besides that, the spear she chose is slightly reminiscent of a trident, one of the canonical weapons born by Ox Head and Horse Face. The dedication to detail of my favourite culture is simply what makes me so excited every time Li comes up with something new! 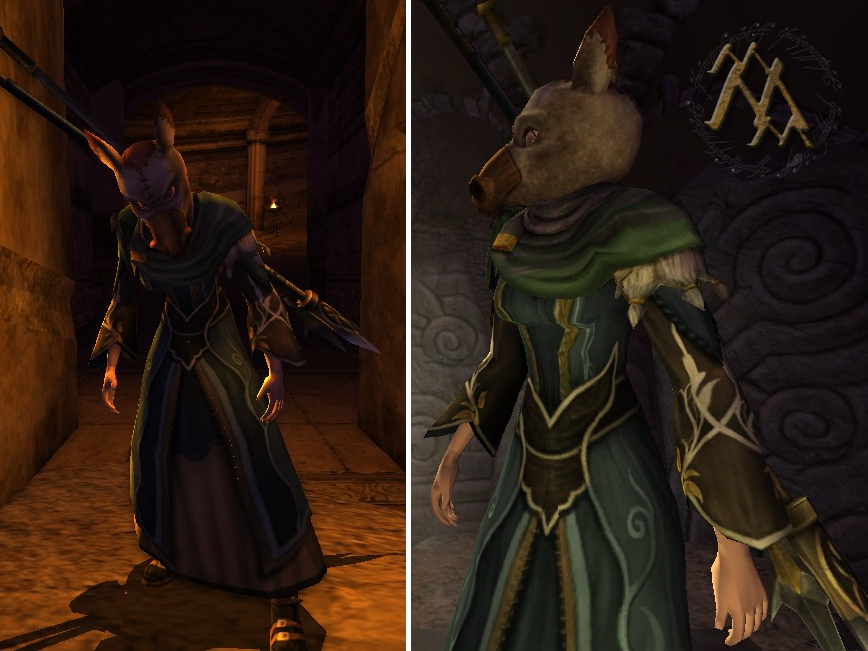 Li suggested the Barrow-downs as the location for the photoshoot, and I recalled the time Gildomir had his pictures taken here. It really is phenomenal to see the differences and similarities between both outfits and their impact on their surrounding environment. For starters, both have a goofy side to them, using a silly head piece. On the other hand, they both represent, to many, fear and terror and death. Plus, the stark contrast in their colour scheme is intriguing as well: Gildomir's outfit featured typical Halloween colours (black, orange, & green) whereas Li's Ma Mian outfit takes inspiration from statues of Horse Face around Asia, such as shrines in Taiwan and Singapore, using much lighter and a more colourful palette, one not typically associated with terror. As always, well done, Li! 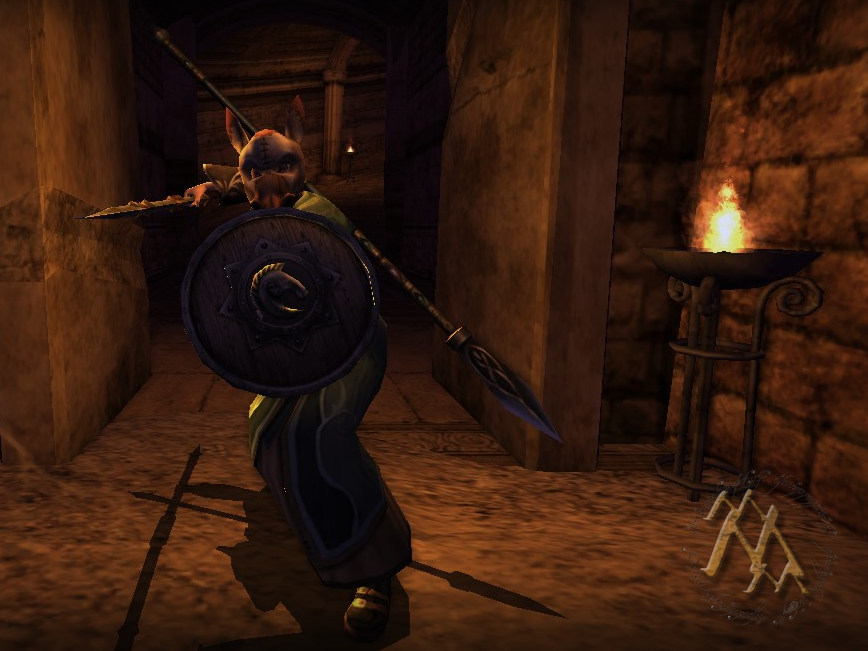 So, without cheating, try to guess why I called this outfit "exploiting." 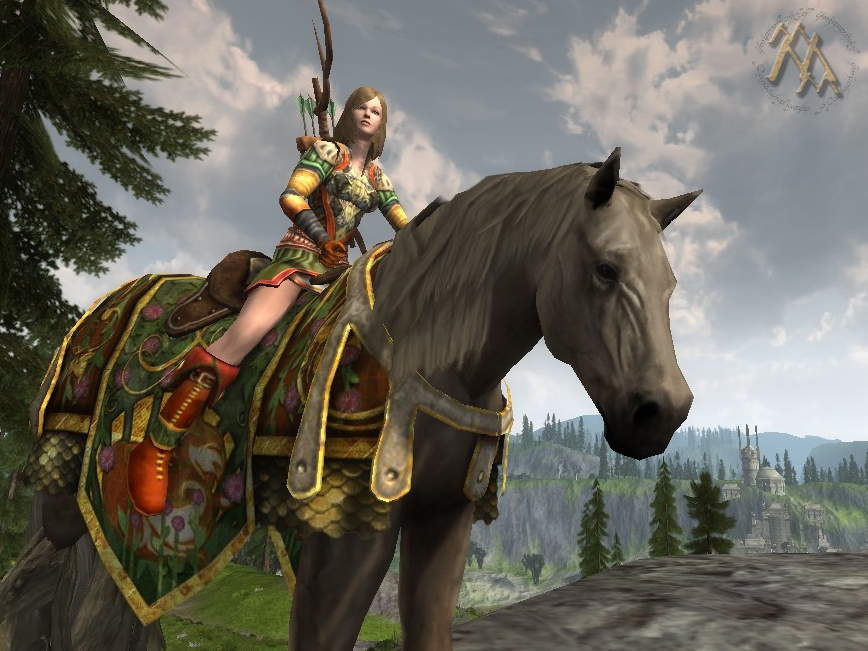 I've always wanted leg pieces in LOTRO that didn't cover the entire leg. I feel that having different lengths gives us a much more vast range of dynamic of the outfits that we make, and in this one here, I think that is achieved. Some of the only pieces that shows some leg are the two Beorning starter armour pieces, as well as the Jacket of Anorien Justice, which has a pretty bland colour palette. 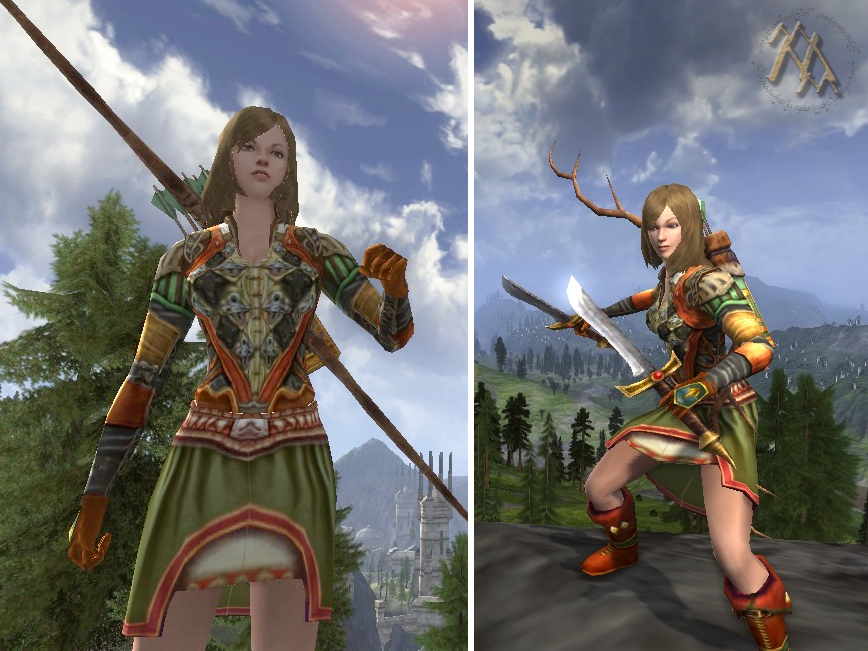 Here, however, is the Leggings of the Anorien Tree, which for some reason glitches out and shows us the undergarments skin instead. The best part about it is that it's dyeable, so it gives us an ability we would otherwise not have with simply not wearing a pants armour. Of course, due to its ability to be dyed, one might question whether it was a glitch at all or just a strange design choice. Indeed it is very weird a design choice, so to me I believe it is a glitch that just so happens to work in our favour. 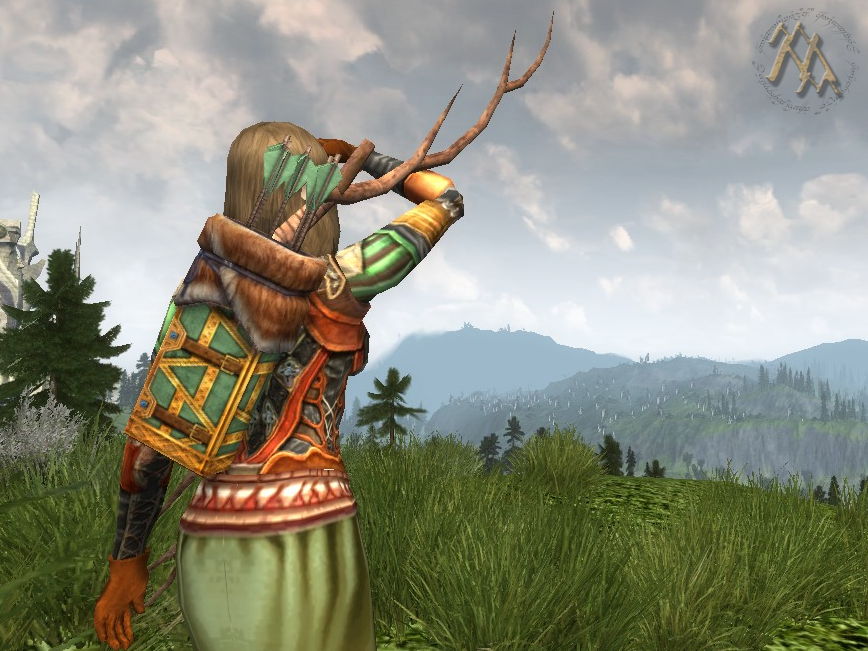 The problem then becomes the question of when they'll notice this and when they'll fix it, if they choose to, because at its most basic it is an exploit of a glitch. However, I remain hopeful that they, if they do fix this, realise how more diverse outfitting could be and begin introducing skin-revealing leg pieces in the future. 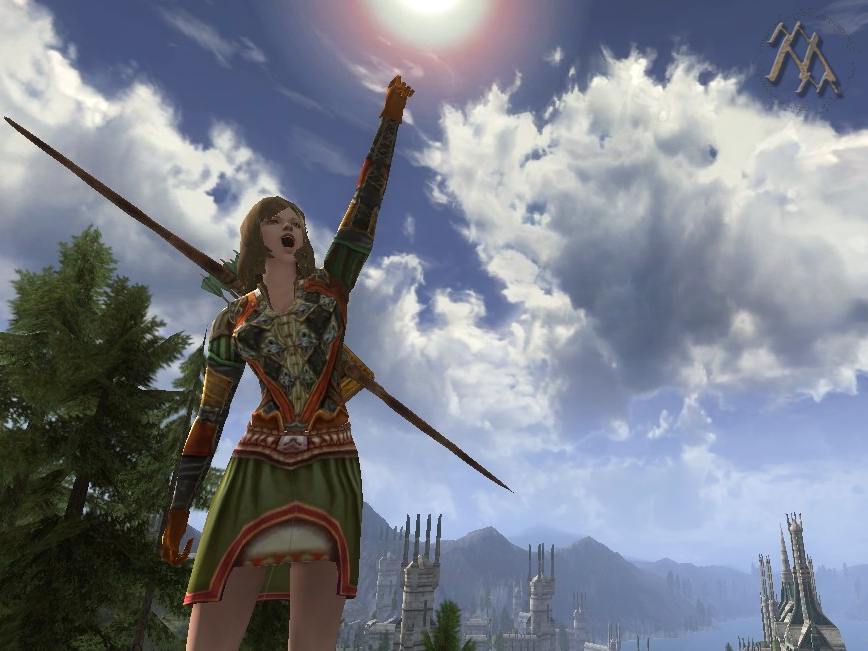 For sneak peaks at upcoming outfits, follow me on Instagram: rvincenzodeleon!
And please drop me an e-mail if you want to request an outfit or just wanna contact me for whatever reason at all:
vince.deleon66@gmail.com